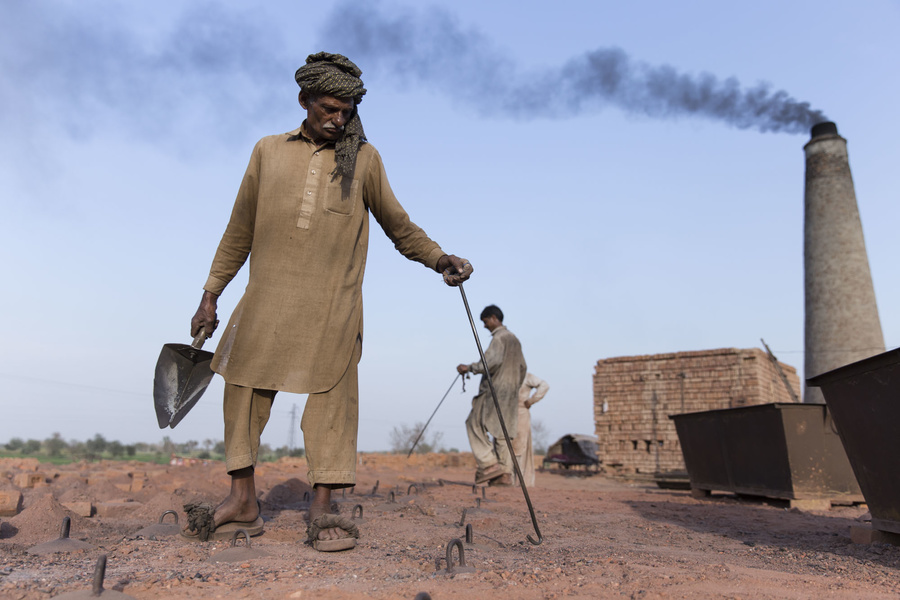 “Sargodha is in the Punjab province of Pakistan. In many cities, I have worked as a brickmaker. In the cities Chakwal, Rawalpindi and Sarghoda where I received good money, I worked there making Chimneys.”

It was a tough job. I had to do this as there was no choice. I did not dream of anything else. I received 300 rupees for producing 1000 bricks. In the wet season, I was unable to work, so I had to take a loan from employers to run the household. The wet season is July, August.”

“We had our own rooms, made of bricks and in some places, there was no water in our houses. I lived in the same house in the winter. I would get my food from local market towns. I was continuously taking loans if someone died and needed the money, borrowing from my employer.”

“I have an older brother who was previously held by my employer, nearby a landlord took him and paid off the loan. My brother is now with that same landlord (near Sargodha) who owns land for farming. He works in the landlord’s house. When we repay the money he can leave. 6 lakh rupees (£600,000) of the loan remains to be paid off. They spent a lot of money on weddings and funerals. He gave his freedom to save me. We came to the city to earn money and to pay back the loan of my brother.” “I am getting married in February. He is not allowed to leave work”

“Now I am relaxed in my current job (cleaning). My hands were always in clay whilst brickmaking and I would have to wash my hands in standstill water and then eat food. My hands are much better now.”

“…as a young girl I played with clay and then gradually began to make bricks.”

“On my own, I produced 3000 bricks. I was very tired. The house was within proximity of the chimney. I grew up like this. children would play while their parents worked so it was not a shock to me. It became routine.”

“It was very difficult and tough working during the hot summer days. In the winter snow/ice would be around the bricks and it would be very tough to put my hands into the clay.”

“I would never think of putting my child through the work I did.”

“The government should provide us with facilities and amenities, school, housing, access to hospitals”…“The law is not being implemented here”

“Many people came, asked questions (media and human rights organisations) asking ‘what are you doing etc..asking the procedure for making bricks’. There was one representative from every family who would be questioned by a camera crew.

Once a group of people came, interested in educating workers, they made a list of the students who wanted to be in their class. They left and never returned.”

“Where I worked they did not hit us, but I heard of bosses hitting workers – girls and boys. I heard where the bricks are baked, they would push people into the chimney door at the bottom and burn them alive. They used to practice this, possibly even now.”

“When we were really tired, we used to sleep without washing our hands, with the clay stuck to them. It is easy to wash off wet clay. We never used soap to clean them, just old water full of old clay and dirt”