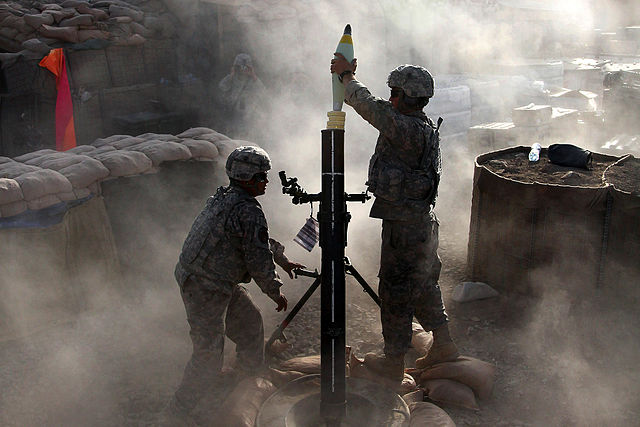 A 20-year project was only a temporary show of force in the end.

Where to begin. Since the invasion of Afghanistan in 2001, the conflict has been in both the headlines and back pages until its reduction in media coverage, lessened to over the table chatter.

There is no doubting that those involved in the September 11th attacks were stationed in Afghanistan in some capacity. But their presence was not limited to the varied terrain of the South Asian nation. Having been invaded, drone struck, bombed and sanctioned, the antagonist of the so-called war on terror met an end, not in Afghanistan, but in a covert operation carried out by a Navy SEAL team in Pakistan. It was swift and quick, relying on professionalism and years of military intelligence and training culminating in the famous final blow broadcast across the world.

Millions of people died as a consequence of the move that mobilised billions of pounds worth of military equipment across the Atlantic. It emboldened fringe terror cells, nationalist groups and sparked more than a generation’s worth of anxiety and prejudice against not only Muslims but people of colour, mostly South Asian.

So just why did allied nations seek the need to invade not one, but two countries in the aftermath of 9/11? There have been many theories, from oil, gas pipelines to mining and even opium farming. But the truth is, we will never know the musings of the joint chiefs of staff nor the presidents they presided over.

The question of when to withdraw troops had been discussed for years. No one knew the answer. But finally, in August 2021, President Biden decided that now would be the time. When the hopes of millions of Afghan people hung on the presence of allied nations to keep the Taliban at bay, A terror organisation that, to begin with, was funded and trained by the US government themselves. This made the responsibility to remain within Afghanistan vital, as the Taliban’s foundations grew stronger by the year since the 1979 invasion by the Soviet Union.

Not only was Afghanistan invaded, but arguably Pakistan too, from the air. Since drone strikes began in 2004 (mostly in the province of Waziristan), according to the New America Foundation, more than 300 civilians have been killed, though some including the Bureau of Investigative Journalism have found more than 1,000 civilians have been killed among the 2,515-4,026 total deaths including militant groups.

It is clear that this allied foray into the country was but a vanity project, with lip service shown to the aftermath of the nation’s fall. British defence minister Dominic Raab is one such example in the lack of concern for Afghanistan, refusing to return from holiday and declining office contact. He instead passed responsibility to a junior minister, Zac Goldsmith, to execute duties pertaining to evacuations of Afghan nationals who assisted the British military.

Families have been separated, terror attacks have taken place and despite this, modus operandi continues to be – leave. If there were any indication of where priorities lie, the bombing that took place at Kabul airport only a few days ago was it. But still, evacuations continue.

Deciding to leave Afghanistan was a bold mistaken move with any progress in the country erased almost overnight. Did allied nations care about the rights of the people of Afghanistan? Probably not. If concern for the safety of Afghan nationals, particularly women rights, was a high priority, remaining in the country would have continued for years to come. Instead, leaving, and as quickly as possible, was a higher one.

Now that Afghanistan has been thrown to the wolves, it leaves a question on many lips. What were allied forces doing in Afghanistan all that time? I don’t think we’re being told the whole story, and it will only be a matter of time until the truth comes out.